Nine years ago today was our wedding day. It was such an exciting day! A day I had dreamed about my whole life. Sometimes I wish I could go back and relive it. Especially the honeymoon cruise to the Western Caribbean! It’s amazing how life doesn’t turn out how you expect and how we fight and struggle through life when things don’t go according to OUR plan…BUT LATER we can look back and see God’s plan was unfolding throughout our entire life. Thank GOD His plan is GREATER than mine and it PREVAILED!

Sunday, December 22, 2002 was the day I met my future husband. The story of how we met is a favorite to tell around my office because we were “set up” to meet that day. You see earlier that year Matt bought a house in one of our new home communities that we were selling homes in. I remember processing his paperwork when he bought the house because he has the exact same name as my cousin, Matt Watkins (makes for funny jokes at family gatherings). Well, the agent that sat out at the subdivision told me about this cute single guy that was as sweet as a “big teddy bear” and she wanted me to meet him. So the company planned a Christmas Open House Party at the subdivision and invited all of the homeowners…and I was to help host the party of course. We had tons of Christmas cookies and egg nog for everyone and several homeowners came including him. We talked and although it was a little awkward at first we quickly found out that we had a lot in common. Then he left and that was it.

Later, after “the party” was over my boss, Lisa, came by and as we were cleaning up she put all the leftover cookies and eggnog in a basket and FORCED me to take it down to his house! I was very hesitant because #1 I didn’t want to seem desperate, #2 there were 2 cars in his driveway and I wasn’t sure who else was there (possibly a girlfriend??) and #3 he could have been a serial killer for all I knew. But I went anyways. I knocked on the door with the HUGE basket of goodies. I felt like Little Red Riding Hood. After a minute he finally answered…in a wrinkled shirt and sleepy eyes. I had woke him from his afternoon nap (a ritual we still continue to this day whenever we can). I offered him the basket and he accepted. And then there was more awkwardness as I stood at his front door. He didn’t invite me inside. Then I left and that was it.

…Until Monday when I received “the phone call” asking for a date :). I said yes and basically we lived happily ever after…One month later on January 22, 2003 he proposed and we were married three months later on April 12, 2003.

He did not turn out to be a serial killer (or the Big Bad Wolf) but as a warning for anyone reading this that might be single…getting engaged and marrying someone in lightening speed like we did is not necessarily encouraged due to the fact that the person COULD potentially be a serial killer. Get to know them for a while first. In our case it worked and I love him and I’m thankful for those who forced me to take the basket to his door. 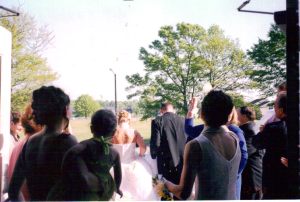 4 thoughts on “Nine Years Ago”