The last week of the Fire Academy is done. After enjoying the three day weekend last weekend it was time for carseat training. I didn’t think there would be too much to learn on this subject but apparently there is. Like a whole text book worth of information that they learned and tested on for 2 full days. 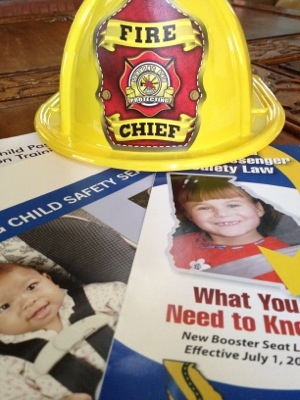 They also practiced installing different car seats in their own vehicles. They did mis-use scenarios where something was wrong with the installed carseat (wrong size for child, forward instead of backward etc.) and they had to figure out the problem and fix it.

Side note: Matt did end up re-installing our car seat for Ben because it was installed wrong…we’ve had at least one of our kids if not two in car seats for the last 15 years and it’s been wrong. So if you’ve never had your car seat checked you might want to consider it. This guy can probably help you: 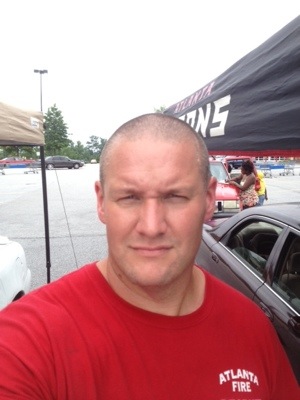 To end the car seat training they helped with a car seat check at a Walmart in Atlanta. 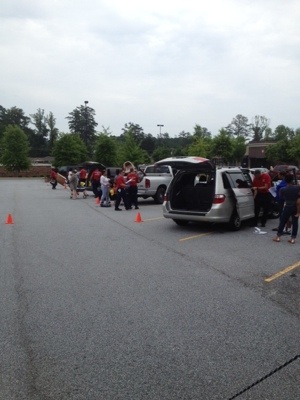 It was an advertised event and they checked car seats, gave them new ones if needed and made sure the person knew how to correctly install the seat as well.

They also gave out snow cones, popcorn and fireman hats to the kids. Here is one of the hats modeled by a handsome little boy:

On Friday they were back at the Academy and Chief Cochran gave a very motivational lecture on his vision for Atlanta Fire Rescue. He was also very open about his faith and that he is a Christian.

Chief Shinkle also spoke to them and told them about the last fallen firefighter they had with AFRD. It was in 2006. He played the radio call for them from the time the call came in that the house was on fire to when they pulled the firefighter out. I believe Matt said the whole thing took place in 13 minutes. Shinkle was on the squad that pulled him out of the house. Several fire departments use the house now for training purposes.

And last but not least he picked up his official shirt with patches and all on it that he will start wearing after Tuesday when he graduates. Here is a sneak peek: