Well, it’s official! Matt is now an Atlanta Firefighter! The night was perfect and I was so proud of him that I couldn’t sleep afterwards just thinking about everything.

He could bring 5 people to the graduation with him so he chose me (of course), Hope, Bella and his mom and dad. Ben would not have been able to sit still that long and he already thinks daddy drives a fire truck anyways.

So we headed to the Atlanta Civic Center…

We took a few pictures in the parking lot. It never fails…one of my kids eyes are always closed. In this one it’s Bella. 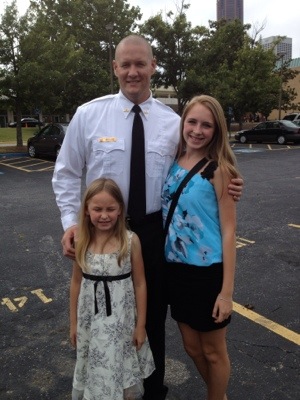 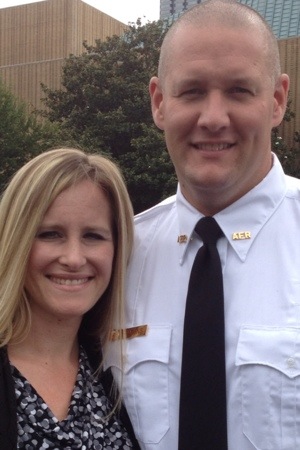 We got our seats and entertained each other while we waited for 2 hours.

While the guys waited outside I got a few pics. Here is Matt and Palmer. They were in the Dekalb Fire Academy together last year before the layoffs. They are also carpool buddies. 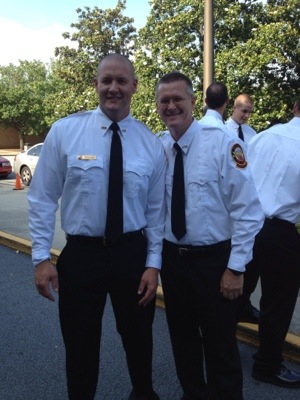 Here is Matt and his squad, Jones and Hall. Great guys! I know Matt will miss them.

Two classes totaling 44 recruits were graduating. The first class started last July and completed EMT and Fire. Matt’s class started this year all of them already had their EMT so only had to complete the fire training. 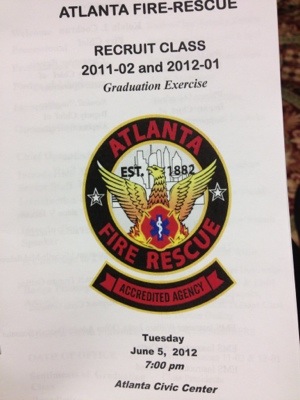 The ceremony opened in prayer and the Pledge of Allegiance. There were introductions of all the Chiefs and trainers. There were several motivational speakers, one of which was Chief Willis, the Chief of the Riverdale Fire Department. She was the #2 Smoke Diver in Georgia and also played a part in fabricating the material used in the firefighters turnout gear and uniforms.

Then it was the time they all have been waiting for…to find out what station they were being assigned to. As they called out their name to come forward they announced the station and shift. Matthew Watkins 6A! 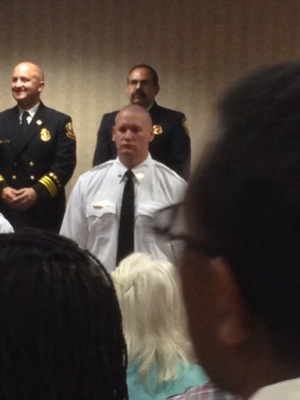 And then I got to go up and pin on his badge. 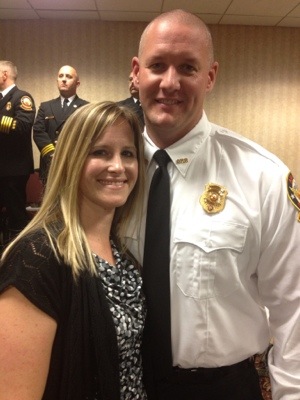 Then they went back to their seats and said their Vision, Mission Statement and Oath of Office. Palmer had a brief speech and presented Chief Shinkle with a plaque from the class and then the ceremony was closed in prayer.

Then it was time to eat! 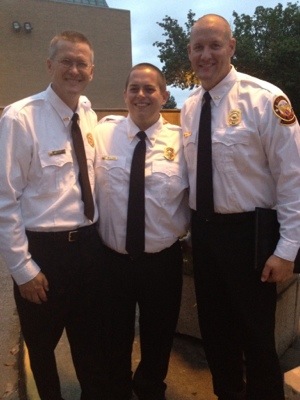 And one final picture with Chief Cochran. 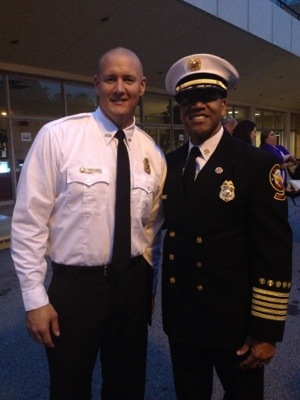 When we got home Bella presented Matt with some drawings.

And then we found out Matt was on the news!

Today he gets to walk through the front door of the Academy as a Firefighter and then off to his new station this afternoon. His first shift begins tomorrow morning at 7:00am at the second busiest station in Atlanta, Station 4 Engine 6 Shift A.

4 thoughts on “Matthew Watkins 6 A”